Back in March, Rishi Sunak delivered his spring Budget. After a difficult year of record government borrowing in response to coronavirus, the chancellor had to walk a difficult line.

The Budget needed to offer continuing support to those struggling with the effects of the pandemic, while getting the economy moving again and starting to claw back the government’s overspend.

Sunak opted for a series of freezes to taxes and allowances, designed to recoup £300 billion of coronavirus borrowing over the next five years.

One such freeze, to the Lifetime Allowance (LTA), is expected to raise almost £1 billion for the Treasury between now and 2026.

Here’s what the freeze could mean for you.

What is the Lifetime Allowance?

When you take benefits from the pensions you hold, the accumulated value of your pension funds will be checked against the LTA. Taking funds above this limit will result in a charge.

You could be liable for a tax charge of 55% on any excess taken as a lump sum or 25% if the excess is taken as regular income. 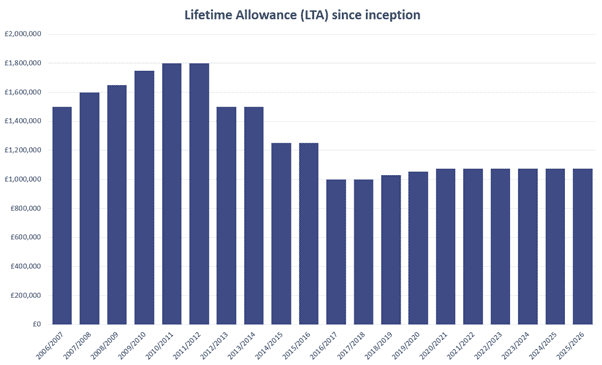 The LTA was introduced in 2006 and initially stood at £1.5 million. It later peaked at £1.8 million between 2010 and 2012. Having subsequently dropped to £1 million, it had been rising in line with the Consumer Price Index (CPI).

When the LTA was introduced, so too were measures designed to protect people who had built their wealth before its introduction, who could now face unfair charges. This was known as “LTA protection” and was available via HMRC.

It is no longer possible to apply for most of these protections but if you think you have LTA protection in place, speak to us. We can help you to make sure it still applies and decide the best way for you to make the most of it.

If you don’t have protection, but your pension wealth on 5 April 2016 exceeded £1 million, you might consider applying for individual protection 2016. Fixed protection 2016 may also still be available in some cases but the rules can be complex so be sure to get in touch with us.

You can use the Government Gateway to check if you have protection in place currently.

What will the freeze mean for your retirement plans?

While a pension pot above £1 million might seem sufficient for a comfortable retirement, that may not be the case.

According to Hargreaves Lansdown’s pension calculator, a 59-year-old male, with £1 million in his pension pot and looking to retire at age 60, would receive a yearly pension of just £28,600 after tax-free cash.

It is quite possible that, even factoring in other non-pension income you hold, £28,600 will be insufficient to provide you with your desired lifestyle in retirement.

Freezing the allowance at just over £1 million will mean more people getting caught out over the next few years. In fact, the government expects the LTA freeze to provide just short of £1 billion in additional revenue over the five years to 2026.

Some of this will come directly from LTA charges, while additional savings will come through unpaid tax relief as those nearing the threshold cease pension contributions.

What can you do now?

If you are near the current threshold you will need to think carefully about where your money is going to come from in retirement.

Pensions are highly tax-efficient, and you might find that breaching the allowance and accepting the charge – especially where you intend to take any excess as income – makes the most financial sense.

Equally, ceasing contributions and moving the money into a tax-efficient savings product such as a Stocks and Shares ISA might be your best bet.

You can pay up to £20,000 a year into an ISA and potentially benefit from inflation-beating returns. What’s more, any gains you make are free of both Income Tax and Capital Gains Tax (CGT).

If you are worried about the impact the LTA freeze could have on your pension plans, be sure to speak to the experts.

At Fingerprint Financial Planning, our team of independent advisors can help you put a long-term financial plan in place designed to make your retirement dreams a reality. Get in touch by emailing hello@fingerprintfp.co.uk or call 03452 100 100.

The value of your investment can go down as well as up and you may not get back the full amount you invested. Past performance is not a reliable indicator of future performance. Levels, bases of and reliefs from taxation may be subject to change and their value depends on the individual circumstances of the investor.